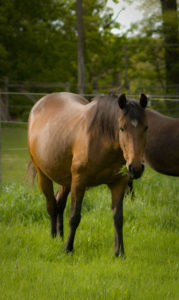 Many broodmares are in the last half of gestation at this time. The latter part of gestation is one of the most important development periods in the life of a foal when the foal is developing in the uterus of the mare.  The importance of this period was recognized in the Nutrient Requirements of Horses, Sixth Edition, when the Committee established that the nutrient requirements of the mare start increasing at the 6th month of gestation, earlier than previously believed.  During the last three months of gestation, the foal may be gaining an average of one pound per day.

The key elements of managing the pregnant mare are the following:

Good quality pasture or forage may provide sufficient energy thru late gestation, but may NOT provide adequate amino acids and minerals for optimal fetal development.  A well-designed ration balancer product may be used from month 5 to about month 10 or 11 of gestation to provide the missing nutrients.  A well-designed feed for broodmares and foals should be introduced prior to foaling so that the mare is on the feed before she foals to avoid the need for a sudden change in feed at foaling. This feed can then be increased after foaling to provide both the increased energy and the increased nutrients that are required for lactation, as well as providing nutrition for the foal when it starts to nibble on feed.  Fresh clean water and free choice salt should also be available at all times.

Feeding the broodmare properly can help reduce the risk of developmental problems for the foal and help insure that the mare can be rebred in a timely manner to produce another foal the following year if desired.